Marketing Automation Vendor Aprimo to be Acquired by Teradata 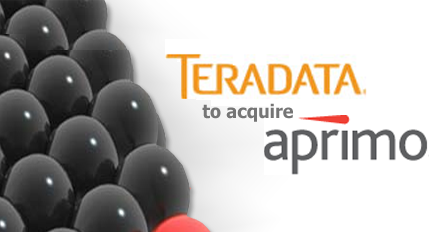 Aprimo to be Acquired by Teradata

Marketing Automation has been available as a Software-as-a-Service (SaaS) vendor for businesses for a little over five years now. This is a very young business space that has always shown high potential and in recent years has solidified it’s space in the tech industry as a platform that isn’t doing anything, but rising the charts. Big corporations like Oracle, IBM and now Teradata, all feel the same way and have shown this with their acquisitions of Marketing Automation and Demand Generation software companies.

Reuters announced last week that Teradata, a data warehousing company has agreed to purchase Aprimo, the Marketing Automation and Marketing Resource Management (MRM) company for $525M. Teradata has now joined the ranks of Oracle, which bought Market2Lead and IBM, which completed it’s acquisition of Unica back in October of 2010.

What company will be acquired next?

A rumor has been floating around for quite some time now was that Google was to acquire Marketo; however, there has been nothing to prove this as being beyond pure speculation. I have confirmed that Google is a Marketo client, but using their tool for Inside Sales only.